The aim of level of detail is to decrease the complexity of a 3D object. When an object in a scene is far enough from the camera, we can reduce texture resolution or the number of triangles.

Here, we focus on the complexity reduction of a grid, for rendering, as example, large terrain or water surface.

This simple implementation will not take into account the shape with a quad-tree reduction, frustum culling or other things. It will only reduce complexity of a grid, on which we can apply a displacement map.

In order to explain the concept of this implementation, we will dissociate what’s happening on a frame and what is going on the camera displacement.

When rendering a frame, the camera is at a given position P. The first step is to project the camera position on the surface we want to render, P’. Around this projection P’, we want to draw grids with different size, but same resolution. That way, it is conceivable to increase the efficiency of rendering with a small loss of quality.

Concretely, we generate a grid with a resolution named K. This grid has K*K squares. The idea is to repeat this grid with different sizes. The initial size of the grid is here named S. We will now add a second level of detail. This level is the grid with a size of S*2. That way, we can add a given number of levels of detail up to N levels.

In summary, we have 3 parameters:

Here, it remains a problem: the overlapping of levels. To fix it, we dig a hole in grids around the first level. We now have an initial grid surrounded by square rings. 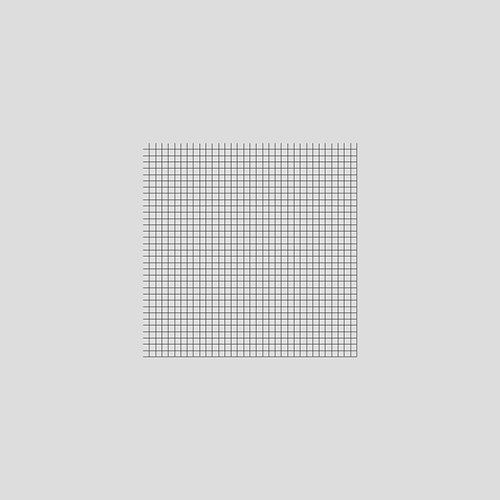 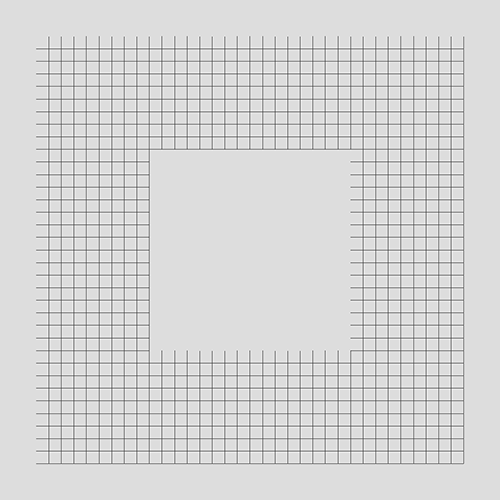 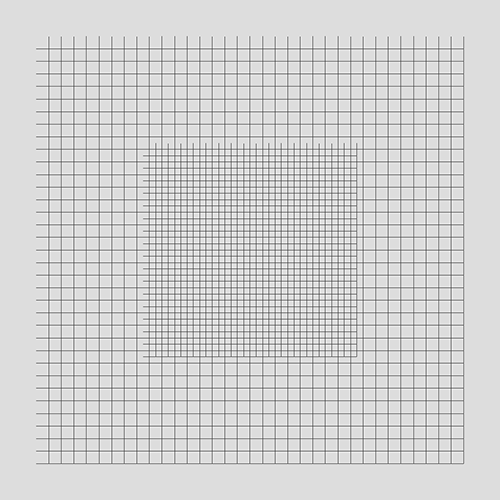 It’s great, we have several grids, but it is not really enough for our needs. The main aim is to have something that adapts to the camera position. Naively, we could follow the projected point P’ with our different levels of detail, and it would works!

Yet, with this movement, we retrieve the same problem as the projected grid: vertices slide in the world space.

Vertices sliding in the world space and height wobbling

One solution is to discretize the space. Instead of moving levels of detail exactly as the camera, we try to fix the possible positions. In an optimal manner, we discretize the space for a given level the same way its grid is discretized. Thus, we can avoid the sliding effect while maintaining a grid adapted to the camera position.

At this point, levels are adapted to the xz coordinates of the camera, but not to its height. The first naive approach is to scale levels proportionally to the camera height. Once again, it will work, but it remains the same problem: vertices slide in the world space.

The final approach used here is to scale proportionally to the integral part of the log2(camera height). This way, we discretize once more the space to fix the problem.

At this stage, we have a working system. However, there remains one last problem. As the space is discretized, we can observe some “vertices popping” between levels, when moving the camera. An other problem is that the edges of the levels do not perfectly stick. This can lead to holes at the stitching. 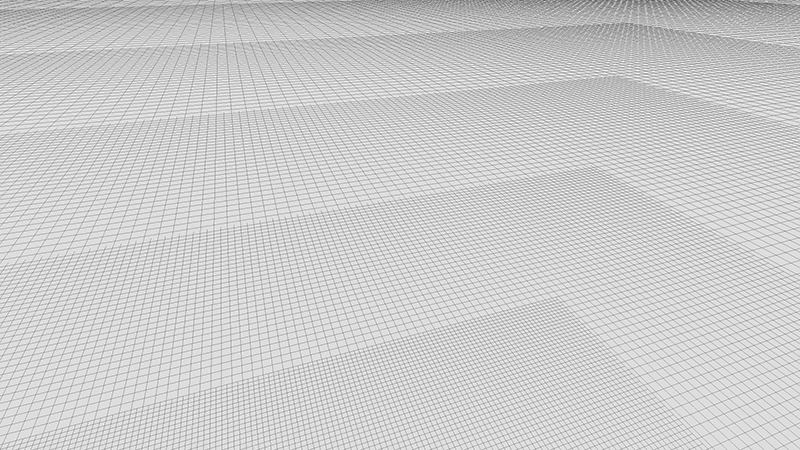 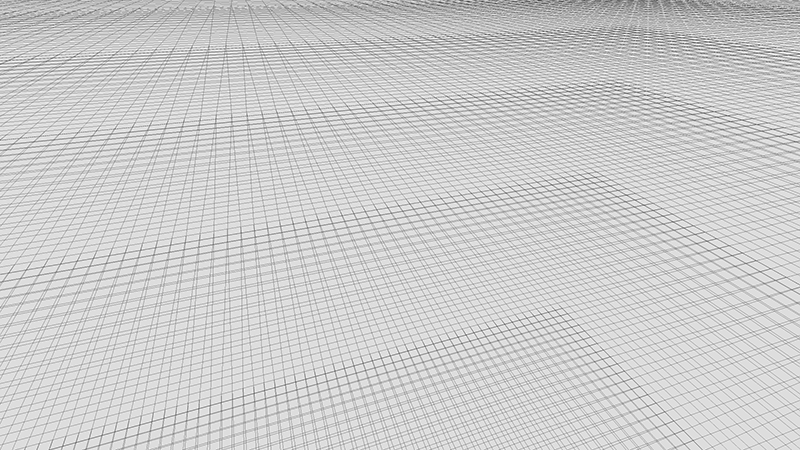 To remove holes and smoothly change level of detail, we add a morphing on vertices. The aim is here to adapt slowly to the upper level.

There are two kinds of morphing:

For each vertex, we compute a morphing factor. If the factor is equal to 0, there is not displacement. If the factor is equal to 1, the vertex position is set to the parent level. The vertex can slide between these positions depending on the morph factor. As this sliding is only between two coordinates and not in the entire space, it does not really affect the rendering by adding swings. 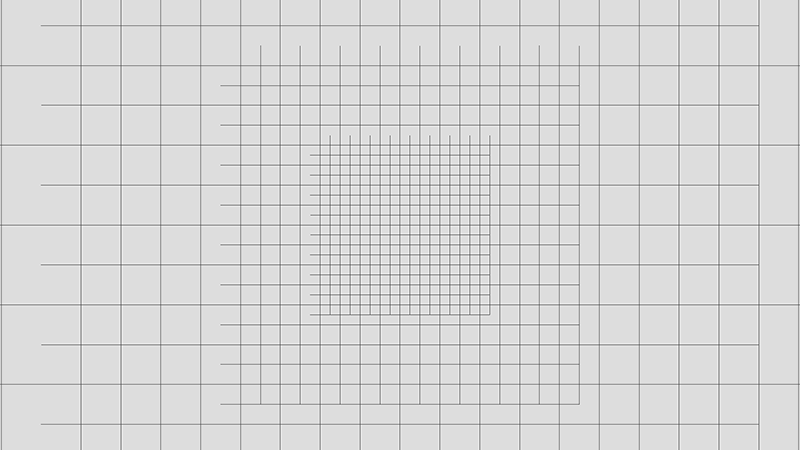 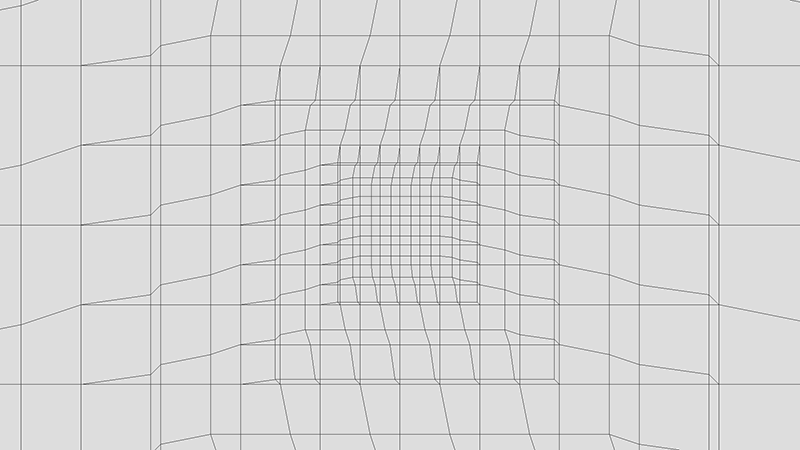 GitHub repository of this implementation.

Even if we want to use N levels of detail, we only need to generate two geometries: the initial grid and the ring around.

With the Three.js library, we can use a THREE.BufferGeometry in order to only generate what we need (only vertices in indices).

After the buffer allocation, we can generate the grid with or without hole.

Adding to the scene

The simplest way to ensure all levels move together and simplify the addition or deletion of the plane is to put all levels inside a group.

We have the same problem as projected grid, that is to say the mesh need to be seen everywhere in the scene or the vertex shader will not be applied. To fix it, we only need to put the group on the camera.

Actually, my implementation is embedded in an object inheriting from THREE.Object3D. This way, we can directly add this object on the camera.

The entire logic is defined in the vertex shader.

At this point, we have small grids with different geometries. With these pieces, we want to display something: here a plane (it could be a sphere for planet rendering as example)

To define a plane, there are several ways. Here, we will not choose the way with the fewer parameters, but a good balance between the number of parameters and computing time:

We want to propose to select if we want to use default values (up vector = y, direction vector = z, point = origin) or use parameters values.

Moreover, we have some parameters to define the level of detail

We already have some uniforms:

The first step in the main of the vertex shader is to prepare data. I mean that we ensure consistency of values and prepare data that will be used as the camera position.

The camera position can be easily extracted from the viewMatrix, without the need to set a uniform.

We want to discretize the space. This means a vertex can only be on some positions. To simplify the process, we work on a system coordinates between -0.5 and 0.5. We will scale the grid later.

The current level of detail depends on the scale retrieved with the uniform, but also depends on the height of the camera. The height is computed as the length between the camera position and its projection on the plane.

We compute the offset of the camera projection in order to center the grid on it. To discretize the space, we truncate the grid center with an accuracy of the size of a square.

As we have seen, there are two kinds of morphing:

The morphing with the upper level is really simple. It is basically the fractional part of the log2 of the camera distance to the plane.

It gets more complicated for the upper level morphing. Indeed, we move a vertex to come near the vertex of the upper level. If we do that, the lower level could also need to take care of this movement. This depends on the selecting morphing function.

To adapt to morphing levels to take care, we can use a uniform value.

The real morphing implementation is embedded inside a function, computeAncestorMorphing. There are several parts inside this function:

Back to the world space

The last step in the main is to back to the world space. We only need to scale the position and use the plane parameters (if needed).

Great! We set up a LOD system. But how to really use it?

A simple way is to partition the shader inside smaller pieces that can be part of another shader.

The three.js way is the following :

To demonstrate the ability to use multiple representation system for the same rendering, I use a function that created the final vertex shader.

Resources around this implementation: